While we waited to close on the house, we took a trip to New Mexico.  First we stopped at Grants, NM and stayed at Blue Spruce RV Park, which was well-located for the exploring we had in mind.  After stopping at the El Malpais Visitor Center to plan our day, we went to the Bandera Volcano, whose crater is 1200 feet across and 800 feet deep.  It was surrounded by some lunar-looking landscape.  Then we visited an ice cave at 8000 feet (pretty much on the Continental Divide).  The temperature in the cave is never above 31 degrees, providing ice for people for over 1200 years. 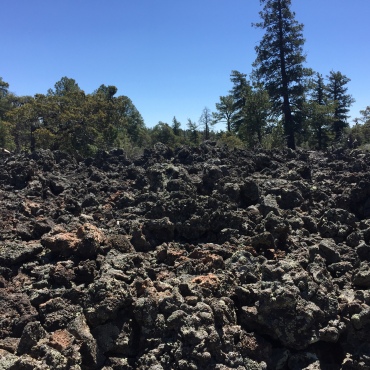 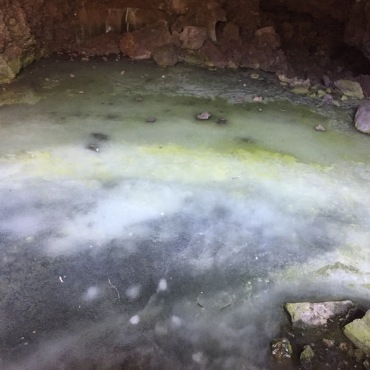 We stopped for some excellent Mexican food and then pressed on to El Morro National Monument.  At the base of the huge sandstone bluff is a waterhole, which attracted Anasazi (which translates as ‘ancestral enemies’, so the term is no longer used; Ancestral Puebloans is the preferred term), as well as Spanish and later travelers, many of whom carved petroglyphs and left messages.  We hiked to the top of the bluff where there was sweeping scenery and an ancient pueblo. 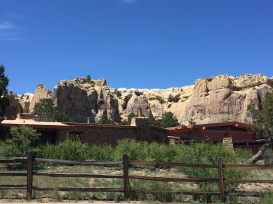 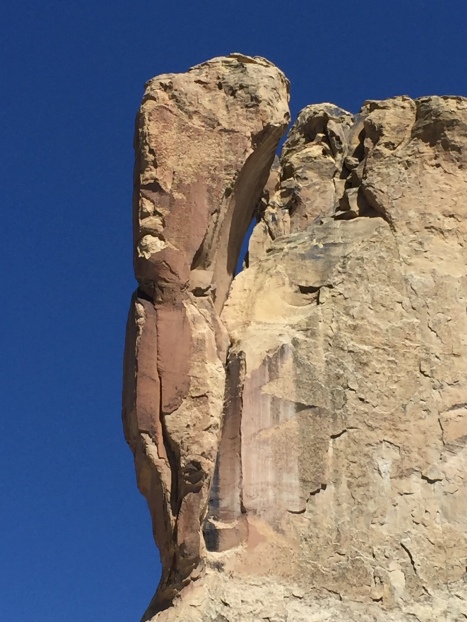 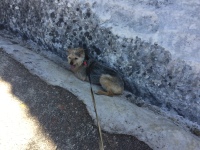 We took the Chain of Craters Backcountry Byway back to El Malpais National Monument, stopping at La Ventana Natural Arch and the Sandstone Bluffs Overlook. 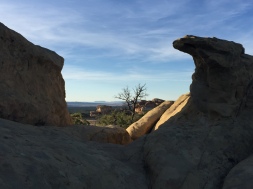 Then we settled into our base in Santa Fe at Los Suenos RV Park.  It was situated close to the historic downtown area, but next to a no-mans land that Abbey adopted as her own.  While our stay started out balmy, it ended with a couple of days when we hunkered down in the campground for a snowstorm! 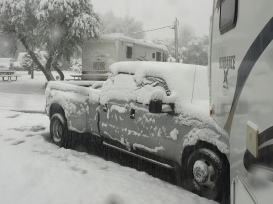 On our first day, Ted and I took a tour of history and architecture of Santa Fe.  It ended at the Loretto Chapel. 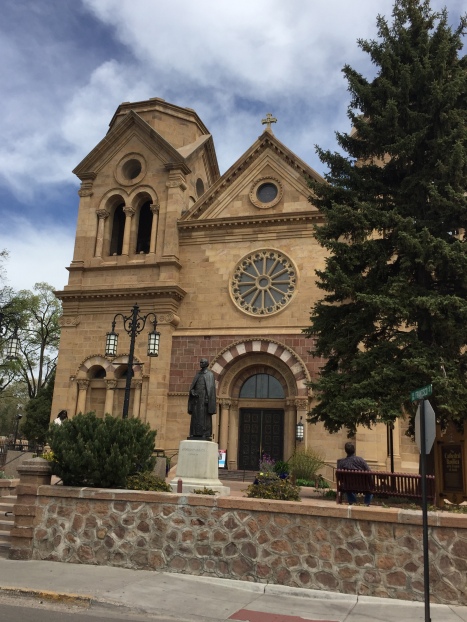 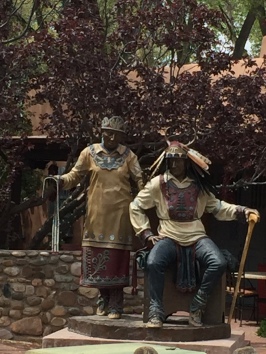 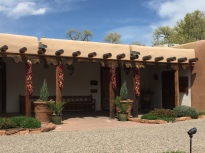 The next day we visited Meow Wolf, an amazing interactive art installation called the House of Eternal Return where one is free to explore all sorts of bizarre rooms and spaces that defy description.  Over 70 rooms created by over 500 artists!  One moment we were in one world and then crawled through an opening to an entirely different experience.  It was pretty fun and amazing.  That evening there was a concert, so we stayed to see Whitney, a very good indie band from Chicago (two members were formerly with the Smith Westerns). 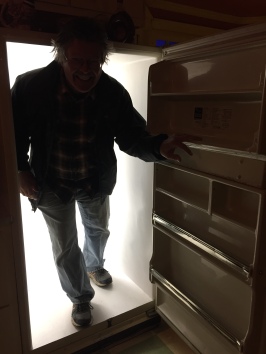 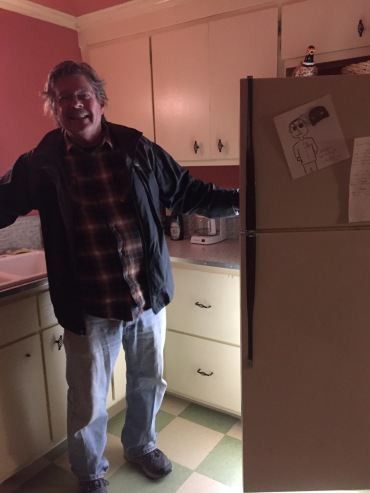 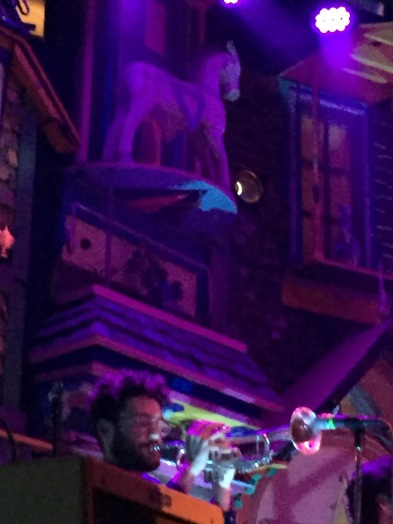 We took a day trip to Bandelier National Monument, where the Pajarito Plateau is the site of homes of the Ancestral Puebloans, dating from 1150-1600 AD.  We took a trail through the Frijoles Canyon where there was a huge pueblo and kivas, and along the cliffs where homes were created by further excavating natural voids in the volcanic tuff of the canyon wall.  There were also rock paintings and petroglyphs. 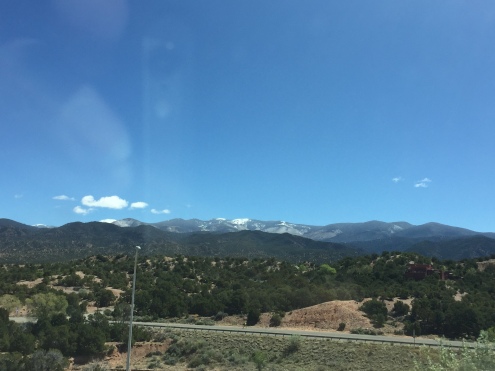 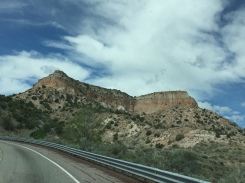 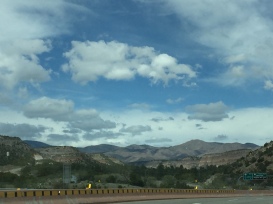 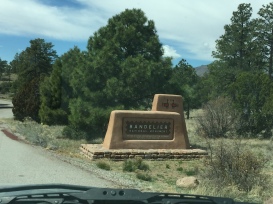 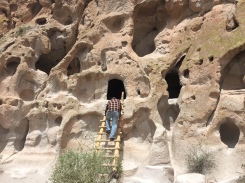 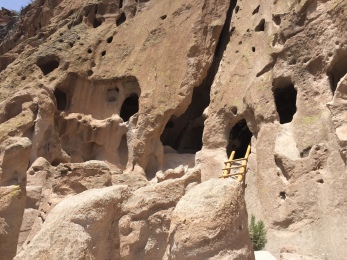 On the way home we drove through Los Alamos and stopped at the Bradbury Science Museum, of particular interest because my father worked on the Manhattan Project at the University of Chicago. 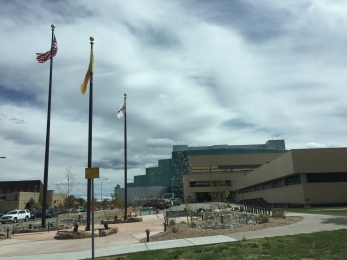 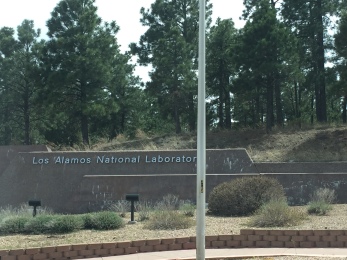 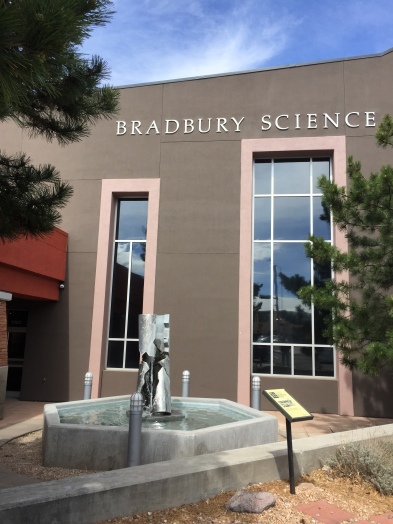 On another day, we ventured north to Antonio, Colorado, watching as dramatic weather moved across the vast landscape.  We returned home via Taos, startled by the sudden appearance of the Rio Grande Gorge. 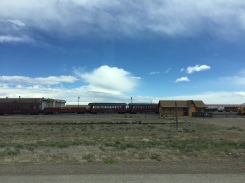 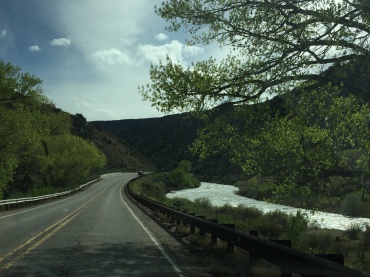 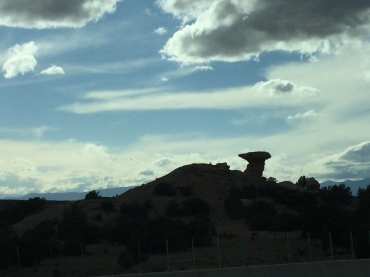 Leaving Santa Fe, we drove to Gallup, spent the night, and rose early for a day in Chaco Canyon.  It took a long rough drive to get to the Chaco Culture National Historical Park, but the scenery and Ancient Pueblo ruins were well worth the effort. There were a series of “great houses” throughout the canyon, which was the cultural hub to peoples who would later identify as Navajo, Hopi, and Zuni.  Built over a period of 300 years beginning in the AD 850, the buildings were massive for the time; Pueblo Bonito had 600 rooms, 40 kivas, and as many as four stories. 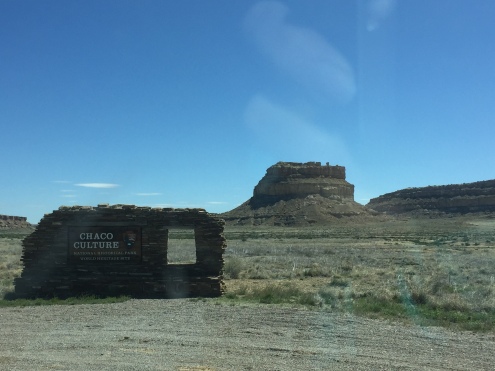 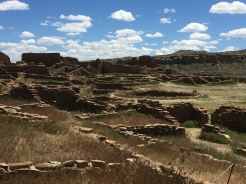 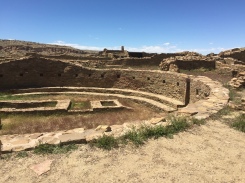 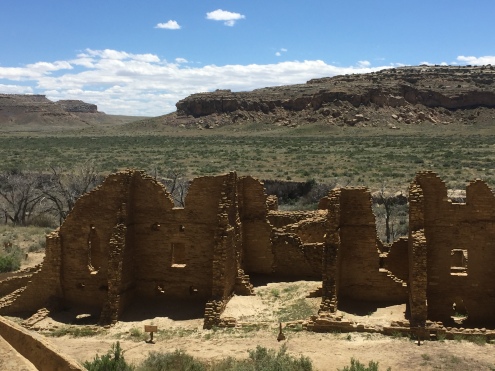 And then we returned to Prescott in time to be sure everything was in place for closing on our house.  We are excited about the house — and we remain confident we’ll be able to continue our explorations!